Legends of Persia by Jennifer Macaire

This is by way of a coda to my review of The Road to Alexander a couple of weeks ago. I finished that review by saying that later books in the series were likely to be a lot better than the first. Jennifer Macaire then very kindly sent me the second book to see if I thought I was right. I'm pleased to say that I was.

Legends of Persia has all the strengths of the first book and none of the weaknesses. Ashley is now a well established character. The change from the Ashley of the first book is clear from the very beginning where she is playing at snowball fights with Alexander's best friend. The Ashley of The Road to Alexander would never have indulged in anything as frivolous as a snowball fight. This Ashley is a warm, generous person who it is easy to sympathise with. Yes, she can still be  cold and harsh, but usually when there's a good reason, as when Alexander finds himself tricked into marriage with Roxanne. Generally she comes over as rather a nice girl and, unsurprisingly, in this book she wins the affection of Alexander's officers and soldiers in a way which she does not in the first. 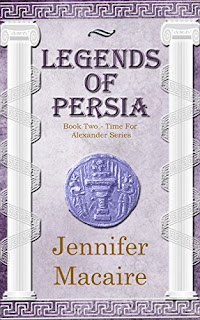 It goes without saying that Macaire's prose continued to carry me along with its deceptively straightforward style. All in all, I can thoroughly recommend this story. It's part of a much longer saga, so the ending is not entirely satisfactory, but it is at least an ending and not one of these awful cliffhangers that some writers of series feel will encourage people to buy the next book. I certainly don't need that sort of encouragement. If Macaire doesn't send me a review copy of the next volume, I'm going to have to fork out and buy my own copy.

Another short review, this time because it's a very short book – just a short story really.

It's possible, I suppose, that you have never read a story in which a young woman arrives at an isolated cottage to find a mysterious figure who seems somehow out of time. If so, you'd better stop reading because this will contain spoilers.

For those of us who have read ghost stories like this before, this one brings no surprises. Given that most of us must have realised very early on that the mysterious figure is a ghost seeking his long lost love, the question is just how well or badly does Evie Gaughan tell this very traditional story. And the answer is that she tells it very well indeed.

Ms Gaughan manages to pack a lot of detail and characterisation into not a lot of words. It's a beautifully written little tale and I'm glad to have read it. Recommended.

The contract with Endeavour is signed and they will soon be republishing the three books in the series about the real-life James Burke and the three featuring (the fictional) John Williamson. There will be more books about James Burke, too. Unfortunately, this is probably going to take about three months, during which my books are no longer available on Kindle. You can buy some of them in paperback, although this may be an expensive option.

I keep blogging, because at the moment I'm getting around two thousand hits a month and it seems wrong to just abandon you all because I don't currently have any books to sell. I will let you know when they are coming back online and I hope that some of you will buy them then