If it's Tuesday, it must be time for another book blog

I'm still catching up on all the book reviews I've been meaning to post. This week's offering is:


The Road to Alexander: Jennifer Macaire

Ashley comes from the future where they have time travel. She has the chance to travel back in time to meet one famous character and interview him. She has always had a crush on Alexander the Great so she chooses to go back to meet her hero. She is supposed to spend just twenty hours in the past but something goes wrong and she finds herself trapped in 333 BC. Fortunately Alexander has taken a shine to her and she finds herself travelling with his army, first as his concubine and later as one of his several wives. 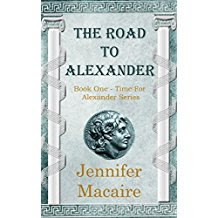 Part of the problem, for me, was Ashley's character. She is, by her own account, an ice maiden. Apart from her ability to fall madly in love with Alexander (did I mention the explicit and amazing sex?), and, later, Alexander’s best friend/lover, Ashley finds human relationships difficult. She is hampered, too, by the fact that she can't open up honestly to anybody as no one must ever know that she is from the future. It is only when she finally admits the truth to Alexander and lets her emotions show in a tearful outburst that I begin to warm to her as a character, but unfortunately this is the climax of the book. It does bode well for the second novel in what is set to be quite a long series.

While Ashley is cold and aloof, Alexander is very emotional and very open (cue lots of explicit and amazing etc etc). He is also spectacularly good at everything and almost godlike. In fairness, Macaire does make him a spectacularly bad singer, which we are reminded of from time to time to give him his single human frailty. On the other hand, at one point the book compares him explicitly to Jesus Christ, which makes him a difficult figure to identify with, even if he’s not about to win Pop Idol any time soon.

The fact that the two main characters are respectively detached and godlike makes for an absence of humanity at the core of the book which is what makes it so easy to put down. At one point Ashley is captured by somebody (it says something that I can't remember who) and held in complete silence in a temple where she discovers that she is pregnant and has a baby which is taken away from her. This material, which some authors would spin out into a book all by itself, is covered in just four pages. The driving force for much of the rest of the story is her attempts, having escaped and rejoined Alexander, thanks to a convenient earthquake, to track down and rescue the child. This mission keeps being interrupted by the odd conquest, battle, betrayal and all the other incidents of Alexander’s rather spectacular life. Thanks to this, for whole chapters at a time the reader can forget about the baby, as, it seems, can Ashley.

The thing is, this isn't really a story about Ashley at all. It's a story about Alexander the Great and his astonishing achievements. Like Ashley, Macaire seems more than a little in love with Alexander and she certainly knows a lot about him. She claims, in an end-note, not to be a historian, but she's the only blogger I know who can post in Ancient Greek and it's clear that she knows her stuff. Sometimes her research gets a little intrusive (as early on, when Ashley detours into a local village for, it seems, the sole purpose of describing daily life in a small village at the time) but enormous quantities of historical detail are incorporated in a thoroughly readable way. Everything from military tactics to medicine to diet to feminine hygiene products is covered in an easy prose style. Macaire’s prose does carry you along, free from any jarring notes. I am old-fashioned enough to think that the quality of writing is an important element in any book and it is one of the things that kept me coming back to this, even when a lack of sympathy with Ashley might have made it easy not to bother.

Overall, it's clear that I have mixed feelings about The Road to Alexander but I did enjoy it. If you're into well researched historical novels, you'll probably enjoy it too. I suspect that now that the characters are established and Ashley has begun to open up as a human being (and even Alexander is becoming a more rounded character), the second book in the series will be even better than this one.

A quick word about my own books

If you are a regular reader of this blog, you will know that I am just in the process of changing publisher. This means that my books are temporarily unavailable on Kindle until my new publisher (Endeavour) is ready to put them into production. Meanwhile, most of them are still available in paperback. I'll let you know as soon as the existing e-book's are back online. For Burke fans there's a special treat as Endeavour are to publish the latest (fourth) of Burke's adventures – this time during the Peninsular War
Posted by TCW at 01:37