A few weeks ago I mentioned that I'd made a trip to Fort Belan on the North Wales coast. The reason was to see the Anglesey Hussars together with some other re-enactors who were displaying their skills there. It was a fascinating day, both because of the display by the Hussars and because of the opportunity to explore Fort Belan itself.

I don't like to be too dogmatic about the history of Fort Belan. While we were there we heard subtly different accounts and the guide to the place (A Maritime Fortress by Michael Stammers) often produced yet another, slightly different again, version. Even the name seems to be a subject of debate. Over the centuries it has been called Abermenai barracks, Fort St David and Belan Fort.

Fort Belan stands on the Menai Strait at a point where the channel is between 300 and 400 yards wide. This position allows it to command the sea approach to Caernarvon. (In theory you could approach Caernarvon by circling around Anglesey from the North, but tides and currents would make this a difficult manoeuvre in a sail powered vessel.) Building seems to have started in 1775. This is well before the beginning of the wars with France, so the first and most obvious question is: "Why build a fort just there, just then?"


The answer is to protect Caernarvon from American privateers. This was by no means a foolish concern, in 1779 Fishguard, on the Pembrokeshire coast, was bombarded by an American vessel and privateers regularly attacked ships in Welsh waters. (In 1797 when we were at war with France, Fishguard was again attacked, this time with the landing of a French expeditionary force.)An artillery battery at this point on the strait made military sense.

The fort itself, though, makes no sense at all. As you can see in the photograph of the cannon, the walls provide no protection for the crew. Generally the height of the walls is too low to provide any real defence for those inside the fort – as can be seen by this photograph of the Anglesey Hussars scaling the walls with a ladder no higher than that used by many window cleaners. 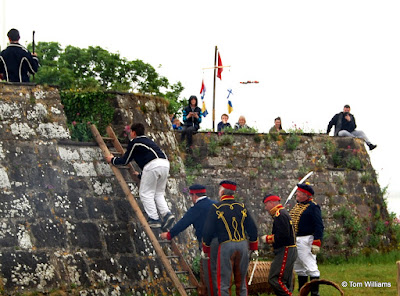 The Hussars, who, like most re-enactors, have a terrifyingly thorough grip of military tactics, also point out that the wall does not have a proper fire step so the defenders would not be able to raise themselves over the wall to shoot and duck down to hide from any response. Yet the fort has not one, but two, convincing entrance gates with the thickness of the first perimeter wall being quite impressive.

The two gates used to be connected by a drawbridge which, sadly, has been replaced by a rather boring path.

The original building was simply intended as a barracks for the gun crews. It's likely that the walls around the barracks were not added until between 1824 and 1827.

Fort Belan and its garrison were not the responsibility of the government. The Wynn family, major local landowners (Thomas Wynn was ennobled to the Irish peerage as the first Lord Newborough), built the fort and raised the Caernarfonshire Militia that were probably its first garrison. When the militia was unavailable, either because it was deployed on active duty or during periods when it was temporarily disbanded, it seems likely that the Wynn family maintained a basic staff at the fort at their own expense.


If you see the fort and its garrison as being essentially a vanity project by a rich local landowner with political ambitions (as many local militias were), then the architecture of the fort begins to make more sense. The barracks needed some sort of perimeter wall built around them and Thomas Wynn did like building walls. So he decided to build them as a castle - but more in the nature of a folly than as a working fort. In the end, Thomas died in 1807 and a shortage of money meant that no work was done until the second Lord Newborough, Thomas John, came of age in 1823 and began to build again. Like his father, he was an enthusiastic builder. He began a huge stone tower in Glynllifon Park, designed as the family mausoleum and he built walls around the barracks. This is the comparatively modest walls with the crenellations shown in the photograph of the second gate. The much more impressive walls housing the first gate seemed to have been built still later, quite possibly at a time that the family built a private dockyard for their steam yacht in around 1845. These were probably principally designed as another folly but, following the Rebecca Riots, which broke out in mid and south Wales between 1839 and 1843, rich landowners may have felt that a strong set of walls that could shelter the local militia in times of unrest had real practical advantages.

Fort Belan therefore combines a real military purpose (to house the garrison for the battery) and possible value as a place to base militia at times of riot with elements of the whimsy demonstrated by the British upper classes in the 18th and 19th centuries.

The fort did actually serve a military function in World War II when it was the base for the local Home Guard and two rescue launches.

It is now privately owned and offers self catering cottages. You can contact Fort Belan through their webpage: http://www.fortbelan.co.uk/

Next week I'll be writing about the Anglesey Hussars' heroic storming of Fort Belan and some of the other things they demonstrated on our visit. Here's a taster to be going on with. 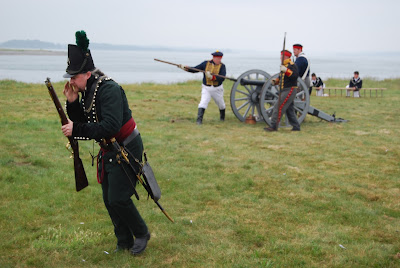 A Word from our Sponsor

A day with the Anglesey Hussars is fun for everyone, but I was particularly interested because I write about the Napoleonic Wars as the background to the adventures of real-life spy James Burke. James Burke's exploits are published by Accent Press and the books are available as paperback or e-books on Amazon. Click any of the covers on the right of the page here to be taken to the Amazon page. 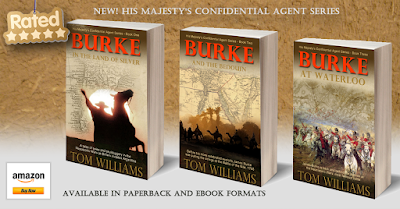