A last word (for now) on Waterloo

I was pleasantly surprised at the interest shown in last week's post on the battle of Quatre Bras. It quickly got almost twice as many page views as my best read posts over the nearly seven years (seven years!!!) I've been doing this. It does suggest a lot of interest in the events surrounding the battle of Waterloo, so this week I'm posting a slightly edited version of an article that I wrote for Antoine Vanner two years ago on his excellent Dawlish Chronicles blog.

Waterloo 200 years on – and its lessons for today

This month marks the 202nd anniversary of the Battle of Waterloo. Do the events of 1815 have any lessons for us today? Quite possibly, they do.

Although, with the benefit of hindsight, we all know that Napoleon was finally defeated at Waterloo, the generals and politicians of the time had celebrated his fall with the capture of Paris in 1814. The Corsican Corporal's exile to Elba seemed to mark the end of the Napoleonic Wars as clearly as the fall of the Berlin Wall marked the end of the Cold War.

As with the end of the Cold War, the British were quick to cash in the peace dividend. The country had been at war more or less continuously for 21 years since France declared what would become known as the War of the First Coalition on 1 February 1793. At the height of the Napoleonic wars the British had over 200,000 British men under arms (supplemented with a further 50,000 foreign and colonial troops). The cost of the war had been horrific. The direct economic cost to Great Britain is usually put at £831 million (a figure quoted by no less a body than the Royal Statistical Society in 1915). In 21st-century value terms the sum would, of course, be massively greater. The cost led to an increase in the national debt to £679 million, more than double the country's GDP. Such an enormous amount of money meant significant disruption to the economy of the whole country. The number of young men taken away from the land in order to fight impacted on agricultural production and the significantly increased taxation also hit the economy. In 1814, the British Treasury issued perpetual bonds (now known as consols) to consolidate some of the outstanding debt. Some of these bonds have still not been paid off and form part of 2015's National Debt.

Little wonder that, as soon as Napoleon was apparently safely ensconced on Elba, the government took immediate steps to reduce military expenditure. Most obviously, troops were demobilised. Other economies included such things as abandoning the line of semaphore towers that connected London to the Channel ports. Ten thousand muskets stored in the Tower of London were sold off.

The folly of these economies was obvious as soon as Napoleon returned to France. The semaphore towers were rushed back into service. The muskets were repurchased (at a substantial loss to the government) before their new owner had even had time to remove them from the Tower.

More critically, Wellington desperately needed troops, but there were few troops to be had. Many of those that were available were new recruits with no experience of battle. More experienced men had either been discharged or sent to America to reinforce troops fighting a completely separate war over there (the war in which the British famously burned down the White House).

Just as nowadays we are assured that in times of war the Regular Army can be efficiently and effectively supplemented with troops from the Army Reserve (the old Territorial Army), so, in 1815, there was a militia that could be called up to serve "in time of war or insurrection". But though Bonaparte was back in Paris, was Britain at war? Legally, it was not, and so the government dithered, refusing to call up the militia until the last moment. When militia troops did arrive, it was so late that many of them went into battle wearing their militia uniforms rather than those of the regiments with which they were now serving. Although paintings made after the event all show Hougoumont defended by Guardsmen in their scarlet, many of the defenders had not yet been issued with Guards tunics.

Wellington was particularly angry that his Staff officers had been dispersed and he was unable to rely on the coterie of veterans who had surrounded him during the Peninsular War. Wellington was a great believer in what would nowadays be called cronyism. He ran the army with a group of men he had grown up with and felt comfortable alongside. Now they were scattered – dead, serving in North America, or otherwise unavailable for active service. Instead, Wellington found himself surrounded with increasing numbers of well-connected young men who sought service on his Staff as a good career move. He wrote, "I am overloaded with people I have never seen before; and it appears to be purposely intended to keep those out of my way whom I wish to have." He ordered back to his side any of the men that he thought that he could trust, even those he had some personal antipathy to. Men who thought they had seen the last of military life found themselves once again under the Colours. The irascible Picton was recalled so unexpectedly that he famously arrived with no uniform at all and rode into battle (and to his death) in civilian clothes.

Unsurprisingly, Wellington was unimpressed with the force available to him: "I have got an infamous army, very weak and ill-equipped, and a very inexperienced staff."

In the end, of course, Wellington won. But it was hardly the great British victory it is painted as. Forty per cent of the troops in the army Wellington commanded were German-speaking and, of course, it was the arrival of Blucher's Prussians that finally saved the day. Earlier in the afternoon there had been panic in Brussels, as the civilian population was convinced that the Allies had lost. It was, indeed, as Wellington is regularly misquoted as saying, "A damn close run thing". A British army, ill-prepared and outgunned, pulled through because, in the end, but fighting men stood their ground, dying by the thousand, sacrificed to what we would now call defence cuts and Whitehall bungling.

The lesson of Waterloo is that you never know where and when you might have to fight. The militia was mobilised too late and, though they appear to have fought bravely, Wellington was always concerned that their lack of experience could all too easily have resulted in them breaking under fire. Two hundred years later we do not have the stomach to see British soldiers die in those numbers but we do not appear to be taking the steps that are needed to ensure that we do not put an “infamous army” into the field again.


A Word from our Sponsor

My book, Burke at Waterloo, has a lot about the battle and the run-up to it, but it is first and foremost a spy story. It starts in Paris with British agent, James Burke, hunting down Bonapartist spies. (There really were an awful lot of them about.) The pursuit moves north and, when Napoleon escapes from Elba James Burke finds himself fighting alongside Belgian troops, so he sees the Battle of Waterloo from the perspective of the Belgian cavalry. It's an exciting read and will give you an idea of what Waterloo and the buildup to the battle would have felt like. It's only £2.99/$3.64 on Kindle and also available in paperback. If you enjoy reading about Waterloo, you will probably enjoy the book. 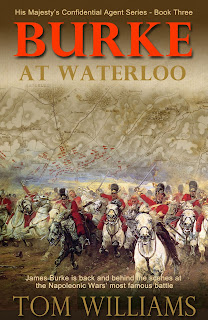