Marie Evelyn is a fellow Accent-author. Her book, 'The Turtle Run' is not a historical novel exactly, but it is a story rooted in history - and a part of English history that still has a surprising effect on the West Indies. She is my guest this week to write about the West Country in 1685 and the Barbados today. It's a fascinating story and I hope you enjoy it.


My mother (Margot Gameson née Evelyn) was born in the West Indies, one of many descendants of  a cousin of John Evelyn (the diarist), who went to Barbados in the C17th century.

The inspiration behind The Turtle Run, (and a scene in the book, described just as my mother witnessed it) came from an experience she had whilst driving in Barbados: she came across barefooted, blue-eyed, fair-haired children struggling to carry buckets of water from a standpipe to their chattel house whilst their mother hollered at them; it made an impression on my mother firstly because they looked so miserable, and secondly because it was the first time she had come across ‘poor whites’ – a phrase that carried much more shame in Barbados then than we can imagine from our current UK perspective. It was only later that my mother learnt that these were Redlegs – possibly descendants of the Monmouth rebels, who were exiled from England to Barbados in 1685.

My mother did a little research out there to try and discover more about the original exiled Monmouth Rebels but it was only many years later – after we had moved to the UK and my parents had retired to Dorset – that she was really able to research the beginning of the story, with its many connections to the West Country.
When Charles II died there was such horror about the return of a Catholic regent (as his younger brother, James II, was), that many people preferred Charles’s illegitimate (but Protestant) son – the Duke of Monmouth – as king. This culminated in the Battle of Sedgemoor in Somerset in 1685 – the last pitched battle on English soil. The Monmouth rebels lost to the royal army, and great efforts were made to hunt down the men who had participated in the rebellion.

Of the judges appointed by King James II to dispense rapid  'justice', the most notorious was Judge Jeffreys. Much has been recorded about his bullying of defendants, (some of whom had not even participated in the rebellion), and his relish at announcing barbarous punishments. His cruelty is best demonstrated by his sentencing of one woman in her eighties, for giving a night's lodging to a man she hadn't even known was a Monmouth rebel: she was to be burnt alive. (Following protests, James II commuted this to 'beheading').

I have read that Jeffrey was quite dismayed that some of the convicted were to face the softer option of transportation to the colonies rather than execution, but this was down to expediency rather than royal mercy: James II rewarded some courtiers with rebels to work on their plantations as indentured labourers, whilst others were able to purchase rebel workers, to the financial benefit of the Crown. Ships left Weymouth and Bristol with the transportees below deck – so crammed that they could not lie down without lying on someone else. The diseases and infections (from wounds still unhealed following the Battle of Sedgemoor) which had characterised the stay of many in Somerset and Dorset jails, were carried forward into these holds, so that some died and had to be 'Buried At Sea' (tossed overboard).

The rebels who survived the sea journeys to the islands (such as Barbados, Jamaica, Nevis) were then worked into the ground: as their period of indenture was ten years, their masters had little incentive in ensuring their well-being beyond this term. The (now) politically incorrect name 'Redlegs' comes - predictably - from the observation that the white labourers could not adapt to working in the sun. In Barbados, the term ‘Redlegs’ includes the descendants of Scottish indentured labourers, the Irish exiled during the Cromwellian purges, as well as the English Monmouth rebels. In time, the plantation owners realised that black slaves were a better investment, and turned their attentions towards Africa.

Following the Glorious Revolution (or the ‘Dutch Invasion’ if you prefer), when James II was deposed and replaced with his protestant daughter and son-in-law (Mary & William of Orange), a pardon was issued and in theory the exiles were free to come home. However, through a combination of the plantation owners' reluctance to release their workers, combined with the men simply having no money to pay the fare back, few if any rebels returned from Barbados to their homeland.

Although the 'Turtle Run' is contemporary, and has a strong romantic element, it has quite a historical feel as the protagonist (Becky) is tasked with researching the fate of the Monmouth Rebels in Barbados. A theme throughout the book is how people’s lives are influenced by the fate of their ancestors.

Who is Marie Evelyn?


Marie Evelyn are a mother and daughter team originally from the Caribbean but now based in the UK.

Mother Margot (Margot Gameson née Evelyn) has been published previously as Mary Evelyn and daughter Marie Gameson has a book  - The Giddy Career of Mr Gadd(deceased) - out in July.  The Turtle Run is their first novel together and is based on their first hand experiences of growing up in Barbados, showing a side of the island probably unknown to most visitors. 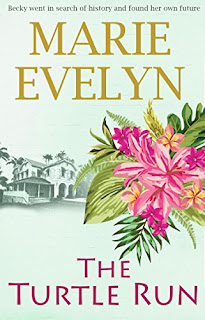 Becky has lost her job and her direction in life so is thrilled when she gets the chance to go to Barbados and research the fate of the exiled Monmouth rebels. But the Caribbean paradise isn't all that it seems. The old plantation house is beautiful but lonely, and the locals are unhelpful. Becky senses that people know more than they are sharing. As her research becomes an obsession, one of the rebel descendants, who still works the same land as his ancestors, starts to relay messages from one of the original exiles. Is she living in a fantasy, or is this really an island of long memories? She soon finds that she is not the only one being led by the past.

You can buy 'The Turtle Run' on Amazon.

I'm on holiday this week and very happy to have Marie Evelyn filling in for me. It's an interesting time to be away because while I'm not around to do anything about it, I've been confirmed as a speaker at the Thames Valley History Festival. I'll be at Waterstones in Windsor at 7.30 pm on Thursday 25 May when I will be talking about the real-life adventures of James Brooke, the hero of The White Rajah. I'll be mentioining this again over the coming month, but please put it in your diaries now. I do hope to see you there.
Posted by TCW at 06:43