I got sent a copy of Fools and Mortals, Bernard Cornwell's latest, by HarperCollins through NetGalley. If you're not a member of NetGalley already, I recommend that you sign up.

I was interested in reviewing this book, set in the world of Elizabethan theatre, because I'm a big Bernard Cornwell fan and reading Carol McGrath's The Woman in the Shadows has given me a taste for fiction set in the 16th century. Perhaps this meant that I came to it with too many preconceptions. In the end, though it is a pleasant enough read, I was disappointed.

Fools and Mortals is the story of Richard Shakespeare, William's younger brother. There was a real Richard Shakespeare, but given how little is known of William's early life it seems that Richard’s is likely to be even more conjectural. Although Cornwell provides a long and fascinating historical note, he doesn't say anything about the real Richard. The fictional Richard runs away from Stratford, where he has beaten and robbed the man he was apprenticed to, and throws himself on the mercy of William in London. William, in this account, is not a particularly nice person and seems to harbour a peculiar antipathy to his younger sibling. Perhaps there was some clue I missed, but I have no idea of why. Neither character seems that well-developed because this is, in the end, not a book about people but a book about theatre. 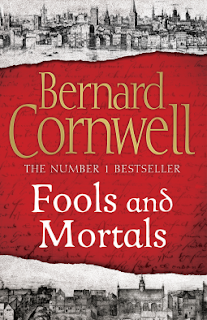 Bernard Cornwell is an enthusiastic member of an amateur theatre group and his love for theatre in general and Shakespeare's works in particular shines through this book. There is an awful lot of detail of what it would have been like performing in the Theatre (where Shakespeare's troupe performed before moving to the Globe), the Curtain, the Swan, or any of the other playhouses that were growing up on the outskirts of London. The political background is also well described.

There is a plot, centring on a stolen script, but that is really a vehicle to carry a story which is far more interested in the opening night of A Midsummer Night’s Dream.

The account of how Dream was written, and what the first performance (at the Lord Chancellor's mansion, rather than in a theatre) would have been like, is fascinating stuff, but it highlights the weakness, as well as the strength, of the book. In order for us to follow what the actors are trying to achieve and what is going on on stage, Cornwell provides a potted summary of the plot. As Cornwell himself admits (and as all the players in the tale know) the story of Dream makes no sense at all. When condensed to a plot summary it is even more ludicrous. So why bother with the plot at all? Clearly Cornwell is concerned that he needs to carry with him readers who have never met Titania or Oberon and never seen Bottom with his ass’s head. But if you are so totally ignorant of the play, why would you be interested in reading a book which is, essentially, about Shakespeare's life? And if you read it anyway, can you honestly have any idea of what is going on based on this sort of super-condensed Cliffs notes? It just doesn't make sense.


Once you start asking yourself who the book is supposed to appeal to, a lot of other issues arise. For example, Cornwell clearly explains that Elizabethan audiences were rowdy and boisterous and the plays were seen in a completely different atmosphere to that in which they are watched nowadays. But is there anybody interested enough to read this book who didn't already know that?

Cornwell's focus is very tightly maintained on the theatre. There is a lot about costume, the layout of the buildings, and the mechanics of a production. But this hardly extends beyond the stage. For example, we are frequently told that there is an orchestra and what instruments are in it, because this might well interest an actor and obviously interests Cornwell. But we aren't told anything about how the instruments are played. By contrast, when a character uses an old wheel lock pistol Cornwell, the writer of military history, gives an enormous amount of detail about how exactly it fires. The arbitrary concentration on those aspects of Elizabethan life that appeal and the disregard of everything else left me feeling that the story lacked the texture that I have come to expect from the Cornwell I met describing Sharpe’s life in the Napoleonic wars.

Perhaps I would be less critical if I hadn't just come from Carol McGrath's tale, set slightly earlier in the 16th century. What so impressed me about that book, which also uses quite a thin storyline to carry a lot of period detail, was just how much I found myself inhabiting the period. In McGrath's book I am with Elizabeth Cromwell as she lives her day-to-day life, while in Cornwell's I am detached, watching Richard Shakespeare moving across an imaginatively realised, but never fully three-dimensional, Elizabethan background.

This is not to say that this is a bad book – just a rather disappointing one. Anyone looking for an easy introduction to the world of Shakespeare's theatres will probably enjoy it and anybody who knows that world already will find fascinating insights. For example, I knew that Shakespeare's troupe was called ‘The Lord Chamberlain's Men’, but I never understood that this was because they were the Lord Chamberlain's men. Perhaps I'm almost alone in my ignorance, but the role of the aristocracy in offering patronage and political protection to theatre groups was something I never understood before.

If you're not looking for a primer on Elizabethan theatre, this is a story with some evil villains, a cunning plan, occasional violence, a love interest and a happy ending. What's not to like? One of the messages of the book is that not everything that Shakespeare wrote was great art and that sometimes writers pad out their oeuvre with lesser works. We shouldn't hold it against Bernard Cornwell that he has written better stuff elsewhere.
Posted by TCW at 02:30