Regular readers of this blog may have noticed that I can get quite enthusiastic about Argentine tango. This week I went to see ‘Tango Fire’ at London’s Peacock Theatre and I thought I’d take the opportunity to chat about it, not least because if you live in London and dance tango the current conversational opener is “What did you think of ‘Tango Fire’?”

Quality tango shows (and this is definitely a quality tango show) cater for a very wide audience. There are those of us who know and love Argentine tango. There are Strictly fans, who want to see the same sort of showy tango (or, more often showy sort-of-vaguely-tangoish) dancing they see on Saturday night TV. There are people who might want to learn to dance themselves. And there are people who just want a good night out with beautiful women flashing their legs in spectacularly acrobatic poses. 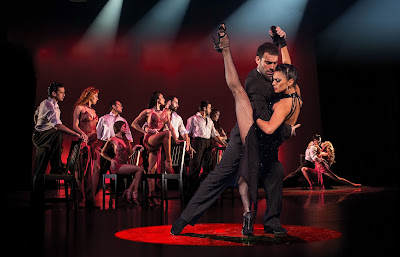 The best tango shows have to cater for all of these audiences at once and ‘Tango Fire’ did about as good a job as you’re going to see. That hasn’t stopped friends of mine denouncing it as a Vegas style travesty of the dance and I'm sure that other people will have complained that it was not nearly flashy enough. The sets are simple, the lighting effects sophisticated rather than brash, and the concept almost minimalist. Five couples danced on a bare stage with a classic tango quartet playing behind them. It could so easily be a disaster, but the skill and commitment of the dancers and the range of the choreography (by German Cornejo) produced an evening that ended in a well-deserved standing ovation.

The performance starts with the sort of exhibition that you might see performed at tango clubs around the world, although you will be lucky if you see this standard of dance. Gradually, as the dancers work through a repertoire of traditional tango music, the kicks get higher, the speed gets faster and the moves get more and more outrageous, while still remaining true to the basics of traditional tango.

It helps that the company is made up of experienced tango dance couples. I have seen tango shows where the performers have come from other disciplines and learn the tango just for that show. However good they are as dancers, the lack of experience usually shows. (This is also part of the curse of Strictly.) Then, in some companies, dancers will move between partners during the evening, while here the fact that people were mainly dancing with their long-term partners meant that they danced with the intuitive understanding and connection that such relationships bring. That meant, too, that while the show was tightly choreographed, each couple was able to express their response to the music in their own styles. It went some way to dealing with the problem of stage tango, which is that the dance is essentially about improvisation and this is often difficult in the setting of a theatrical performance. Here I felt that I was watching couples expressing themselves in dance, rather than stepping mechanically through choreography that had been laid down for them, which can unfortunately sometimes be the case.

After the interval, the music changed to more modern tango with Piazzolla featuring prominently. For some reason Piazzolla seems to be out of fashion in London at the moment, so it was lovely to hear his music and see the dancers pushing the boundaries of tango. Sometimes the boundaries were less pushed than trampled over as numbers moved way beyond anything I have seen described as tango before. Still, you had to admire the astonishing athleticism shown as women were lifted above heads, thrown across shoulders and tossed down onto the ground in performances that were as much gymnastic display as dance. Yet the movements, however extravagant, were always smoothly executed and spot on the beat. Was it tango? Much of the time, it was not, and purists were duly horrified. But the first half clearly was tango and if we want to go a little wild (says the man who likes to dance his partner up and down any convenient staircase), why shouldn’t we? Not everyone in the audience accepts the authority of the Tango Police and Strictly fans paid for their tickets too.

There were legs, of course: lots and lots of unbelievably long legs, doing things that most people’s legs will never do. The women were shown off in a succession of stunning costumes. Yes, some of them probably crossed those boundaries again. A body stocking with a few tendrils of glittery green plant providing a minimal degree of modesty probably could have been rethought. And hot-pants raised a few eyebrows (though I’ve seen women dancing in very short shorts socially and the men they danced with never objected). We’re back to the fact that you have multiple audiences. There were (it seems a rule for tango shows) an astonishing number of costume changes catering for people who like yards of billowing fabric and for those who consider that the average erotic dancer is hideously over-dressed. Again, you must accept that the show has to appeal to everyone and that therefore not all of it will appeal to you. Let a thousand costume changes bloom, as Chairman Mao almost said. 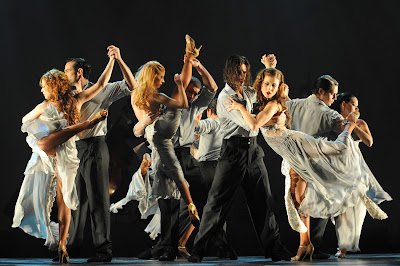 The orchestra, in these things, can sometimes be a bit taken for granted. Here, though, they were astonishingly good and the audience loved the occasional breaks from the dancing when we just had the chance to listen to them. The musical arrangements allowed each performer the chance to shine, showing themselves as wonderful soloists as well as generous members of a quartet. The singer, though, did not appeal. Tango singers are not as other vocalists. The tradition of tango songs is built on loss: loss of place, loss of love or, as in the Piazzolla classic ‘Adios Nonino’, loss of a parent. The singer’s voice should convey experience and loss and, often, the influence of far too many cigarettes. In Argentina you may be told that to truly understand tango you must have suffered and Jesus Hidalgo has clearly not suffered enough. His boyish charm and beautifully modulated voice would have been great in another show but it was the most obvious weak point in this one.

Altogether, a brilliant evening, rounded off with the chance to dance in the bar. The lesson there may not have transformed respectable English couples into tangueros and tangueras in one evening, but I was impressed by the enthusiasm of both teachers and pupils and the progress made from a standing start. It’s a shame that there was no advice given on where people could go to learn more. Based on my own experience (other teachers – good, bad and indifferent – are also available) I recommend that people in London could try Bianca (https://www.rojoynegroclub.com/) who can be demanding but who will really improve your dance, or Alex (http://www.alexandrawoodtango.co.uk/) generally regarded as one of the nicest people on the London scene and a wonderful teacher.

Health warning: dancing tango can take over your entire life. You are at serious risk of having far too much fun, meeting lots of lovely people, learning Spanish and spending all your money on flights to Buenos Aires. Shows like ‘Tango Fire’ can be the first step on a pathway to addiction. Probably best to stay home with a nice cup of tea.

Burke in the Land of Silver grew, in part, from my love of Buenos Aires, where most of the story takes place. But there is no tango in it at all, because in 1806, when the story is set, the tango had not yet been invented. It was an interesting time, though, with a British invasion in which a real-life James Burke played a significant role. If you're interested in the history of Argentina, or just want a good read with cunning spies, wanton women and a small war, give it a go. 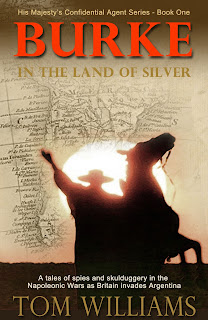