Another guest post this week as Maggie Cammiss tells us about how she came to write her first novel (published by Accent Press, who also publish my books). Everybody starts differently and it's always interesting to see how people get from that first idea to seeing their words in print.

It’s taken a while but I think I’ve arrived. This summer I put ‘novelist’ in the ‘profession’ column of my brand new marriage certificate. But my biggest challenge these days is applying backside to chair and actually getting the writing done. I live in a beautiful part of the country and the temptation to down tools and go for a walk on the beach, whatever the weather, is always there. Self–control has never been my strong point.

I’ve always been an avid reader – my mum made sure I joined the public library as soon as I was old enough – and my love of the written word was reinforced in my first career in public libraries. Later, I moved into film archives, where I discovered an interest in history and current affairs, and in 1989 I joined Sky News, when the 24 hour news channel first launched. I wasn’t a journalist and my background in libraries and archives presented an unconventional route into television.

Working in rolling news was a bit like being in a revolving door; there was always something going on, no matter what the time, day or night. But the shift patterns meant I had time to concentrate on my growing love of writing. I read mostly fiction and that was what I wanted to write. But there’d be no paddling about in the shallows of short story writing for me; I decided to jump straight in.

Like a lot of people who tell you they would write a novel if only they had the time (!), I had this naïve idea that, because I was a keen and critical reader, writing a novel wouldn’t be too difficult. I was soon disabused of that notion; writing convincing dialogue is hard, I discovered. But I was determined. I went on a residential Arvon course and began collecting a library of how-to books. I joined a local writing group, bought myself some notebooks and set about coaxing the characters in my head onto the page.

I’d been warned that my characters would have their own opinions about what was going to happen. I didn’t take this very seriously. They are my creations, I thought; they will do as I say. Wrong. My characters always know their own minds. I’ve been taken up so many literary cul de sacs I’ve developed a reversing light. But I’ve learned to wait and trust my subconscious; the solution will reveal itself in its own time – usually in the dead of night. Which is why I keep a notebook by the bed: to jot down those elusive thoughts that would otherwise vanish with the dawn. It helps me believe that I’m in control.

It’s a bit of a cliché these days, but the old advice to write about what you know certainly worked for me. The 24-hour rolling news environment provided me with all the inspiration I needed for my debut novel No News is Good News and I used the familiar setting of a television newsroom as the background to the novel. It concerns a young producer whose career is compromised by an intriguing storyline which eventually threatens her job and reputation. There’s a romantic element to the story, as well as some dramatic twists and turns. I joke that I changed all the names to protect the guilty, but I promise you, the characters and storylines are entirely fictitious. 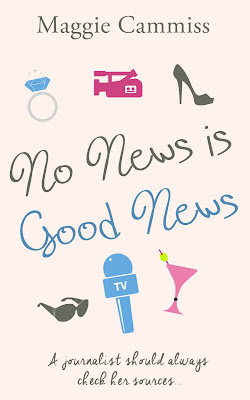 I didn’t have an agent, but I’d read about Accent Press in Writing Magazine and I submitted the novel via their website. To my surprise and delight, Accent took the book on and it was published last December. Since then, I’ve been working
hard on the next novel, which is set in the same fictitious TV newsroom and features a minor character from the first book, with a whole new set of personalities and problems to grapple with. It's now in the final editing stages, so look out for it in 2016.
My advice to anyone contemplating writing a novel and beset with doubts – don’t talk about it, just get on with it. Otherwise, how will you know?