Waterloo summary and a request

So, finally, the Battle of Waterloo is behind us.

Two hundred years ago, things weren't quite over. Despite what Abba tells us in the song, Napoleon did not surrender at Waterloo. He left the field and fled south in a carriage. After Waterloo, though, the dream of a return to power was over. Despite a heroic final stand by French soldiers north of the capital, Paris fell to the Prussians and was soon occupied. Napoleon headed west, believing that he would fare better as a prisoner of the British than if he fell into Prussian hands. Eventually, of course, he did surrender to the British who, despite calls for his execution, allowed him to live, but exiled on St Helena.

Last week I blogged on the battle of Quatre Bras, the Battle of Waterloo, and the aftermath of the battle. I also had a guest post on Antoine Venner's "Dawlish Chronicles" blog, which discusses the implications of Waterloo for today. On my own blog, there was a discussion of the importance of Waterloo to British history published in April.

So there you are, over 5,500 words telling you everything you need to know about Waterloo. And all free, thanks to the wonders of blogging, Which makes this an obvious point at which to mention that my work on the facts of Waterloo was background for my novel Burke at Waterloo. It's a spy story, starting in Paris with British agent, James Burke, hunting down Bonapartist spies. (There really were an awful lot of them about.) The pursuit moves north and, when Napoleon escapes from Elba James Burke finds himself fighting alongside Belgian troops, so he sees the Battle of Waterloo from the perspective of the Belgian cavalry. It's an exciting read and will give you an idea of what Waterloo and the buildup to the battle would have felt like. It's only £2.99/$4.59 on Kindle and also available in paperback. If you have enjoyed reading the blog posts, you might well enjoy the book. In any case, you might like to buy a copy if you are appreciated my efforts here. Thank you. 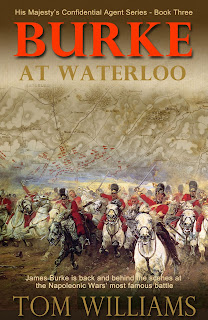