Book Review: The Woman in the Shadows by Carol McGrath


Carol McGrath has left the 11th century to add yet another book to the already crowded shelves of Tudor novels.

As somebody who writes about the 19th-century, I have always struggled with the wild enthusiasm that people seem to feel for books about the Tudors, but The Woman in the Shadows has brought the period alive for me in a way that many others do not. 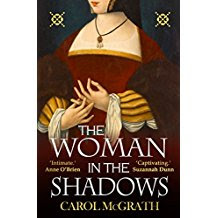 Hilary Mantel has recently criticised writers who empower female characters in periods like the 16th century when, she claims, women were more likely to be "the victims of history". In her own hugely successful Wolf Hall, Mantel concentrates on the men in the story and Thomas Cromwell’s wife, Elizabeth, seems to exist mainly so that she can die tragically halfway through. McGrath's approach is almost exactly the opposite of Mantel’s. In The Woman in the Shadows, Cromwell is the almost marginal figure that Elizabeth is in Wolf Hall. This is a story not just of a woman but of women.

Elizabeth Cromwell's world is dominated by females. She herself is a successful businesswoman. As the widow of a draper, it is credible to suppose that she might have taken over her dead husband's business and become successful in her own right. She is not, though, ever totally accepted or trusted by the men who dominate the Guild, so she comes to rely on the network of women around her: her mother, her sister, her sister-in-law and her servants. The book shows the power that women could wield in this almost parallel feminine society, but it does not romanticise their position in the wider world. Women are physically weaker and always at risk of assault from men. Elizabeth is initially forced by her father into a marriage she does not want, to a man who can never love her. She almost loses her business when her store of cloth is burned down by men, and she has to stand helplessly by while her own male servants try to deal with the damage. When she is attacked and robbed she relies on men to drive off her assailants. When she marries Cromwell (a true love match) it is to the man in her life that she turns when she is threatened with legal action by another draper. When she finds herself crossed by an old suitor, it is her husband who deals with the matter.

McGrath strikes a fine balance between Elizabeth Cromwell the successful independent businesswoman and Elizabeth Cromwell the victim of a potentially violent and sexist society. We understand her reliance on men and, at the same time, her fierce independence. It's significant, though, that in the end she gives up her job and her independence to take on the role of professional wife, entertaining Cromwell's friends as his political star rises.

McGrath’s book brings Elizabeth Cromwell out of the shadows but Cromwell himself becomes a very shadowy figure in his turn. We have glimpses of a man who is secretive and ruthless. When the ex-suitor suddenly vanishes, Thomas Cromwell tells Elizabeth only that he has been "lost at sea". She feels it wiser to ask no further questions. Her world is defined by her business, her religion (she is a good Catholic) and her family. She does not know exactly what Thomas is up to as he goes about England closing monasteries and, to the extent that she must have a fair idea of what is going on, she takes care not to understand. She worries about his heretical “humanist” views, but she does not really understand or challenge them. She suspects him of having had an affair, but when he does the Tudor equivalent of telling her not to worry her pretty little head about it, she agrees to ask no more questions. Yet it is Elizabeth who holds the Cromwell household together, raising the children, entertaining friends and associates, arranging marriages, concealing awkward pregnancies in the household and providing the base from which Cromwell can sally forth to battle in the masculine world and to which he returns to find the love and security that he clearly needs.

McGrath brings the world of the Tudor woman, from the dangers of childbirth to the daily business of running a home, to vivid life. There are fascinating details, such as the care taken in choosing fabrics so as not to break the laws governing what class can wear what trims on their dresses. Sometimes, inevitably, there can be a bit of a history lesson dropped in, but (especially as the book gets into its stride) most of the detail slips unobtrusively onto the page. McGrath has obviously done a great deal of research into her period, but she wears her learning lightly.

The story moves back and forth in time. I'm old-fashioned enough to prefer books that start at the beginning and finish at the end, but the characters are real enough and the descriptions so clear that the non-linear plot is unlikely to confuse the reader. The prose flows nicely and the story has enough incident to carry the reader along without becoming overly dramatic. (One exception is where Elizabeth is robbed. If I were in a strange city carrying a lot of cash, I wouldn't take a shortcut down a dark alley in the 21st-century, so I struggled with the idea that she would have done it in the 16th.) As in real life, some of the most dramatic things are never quite explained. Far from being a weakness, I think this is a strength. Exactly who was Sir Antony and who was the man whose dogs so conveniently arrived to stop him doing murder? In real life every villain is not tracked down, every crime is not neatly solved and many mysteries remain just that. Like Elizabeth Cromwell, we find ourselves in a Tudor world which can move from calm and beauty to sudden apparently irrational violence and we can only retreat into her home, bar the gate and hope that it will not bring us down.

McGrath has put a sympathetic woman into a beautifully realised world and told her story in lucid prose. It’s a lovely book and a refreshing counterpoint to some other recent Tudor bestsellers.